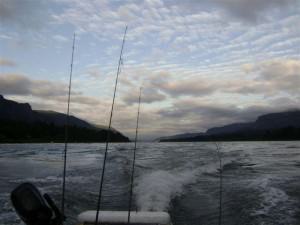 The Columbia River begins its 1,243-mile (2,000 km) journey in the southern Rocky Mountain Trench in British Columbia (BC). Columbia Lake, 2,690 feet (820 m) above sea level, and the adjoining Columbia Wetlands form the river’s headwaters. The trench is a broad, deep, and long glacial valley between the Canadian Rockies and the Columbia Mountains in BC. For its first 200 miles (320 km), the Columbia flows northwest along the trench through Windermere Lake and the town of Invermere, a region known in BC as the Columbia Valley, then northwest to Golden and into Kinbasket Lake. Rounding the northern end of the Selkirk Mountains, the river turns sharply south through a region known as the Big Bend Country, passing through Revelstoke Lake and the Arrow Lakes. Revelstoke, the Big Bend, and the Columbia Valley combined are referred to in BC parlance as the Columbia Country. Below the Arrow Lakes, the Columbia passes the cities of Castlegar, located at the Columbia’s confluence with the Kootenay River, and Trail, two major centres of the West Kootenay region. The Pend Oreille River joins the Columbia about 2 miles (3 km) north of the U.S.–Canada border.

Course of the Columbia RiverThe Columbia enters eastern Washington flowing south and turning to the west at the Spokane River confluence. It marks the southern and eastern borders of the Colville Indian Reservation and the western border of the Spokane Indian Reservation. The river turns south after the Okanogan River confluence, then southeasterly near the confluence with the Wenatchee River in central Washington. This C-shaped segment of the river is also known as the “Big Bend”. During the Missoula Floods 10,000 to 15,000 years ago, much of the floodwater took a more direct route south, forming the ancient river bed known as the Grand Coulee. After the floods, the river found its present course, and the Grand Coulee was left dry. The construction of the Grand Coulee Dam in the mid-20th century impounded the river, forming Lake Roosevelt, from which water was pumped into the dry coulee, forming the reservoir of Banks Lake.

The river flows past The Gorge Amphitheatre, a prominent concert venue in the Northwest, then through Priest Rapids Dam, and then through the Hanford Nuclear Reservation. Entirely within the reservation is Hanford Reach, the only U.S. stretch of the river that is completely free-flowing, unimpeded by dams and not a tidal estuary. The Snake River and Yakima River join the Columbia in the Tri-Cities population center. The Columbia makes a sharp bend to the west at the Washington–Oregon border. The river defines that border for the final 309 miles (497 km) of its journey.

The Deschutes River joins the Columbia near The Dalles. Between The Dalles and Portland, the river cuts through the Cascade Mountains, forming the dramatic Columbia River Gorge. No other river completely breaches the Cascades—the other rivers that flow through the range also originate in or very near the mountains. The headwaters and upper courses of the Klamath River and Pit River flow through much of the Cascades; in contrast the Columbia cuts through the range nearly a thousand miles from its source in the Rocky Mountains. The gorge is known for its strong and steady winds, scenic beauty, and its role as an important transportation link.[13] The river continues west, bending sharply to the north-northwest near Portland and Vancouver, Washington, at the Willamette River confluence. Here the river slows considerably, dropping sediment that might otherwise form a river delta. Near Longview, Washington and the Cowlitz River confluence, the river turns west again. The Columbia empties into the Pacific Ocean just west of Astoria, Oregon, over the Columbia Bar, a shifting sandbar that makes the river’s mouth one of the most hazardous stretches of water to navigate in the world.