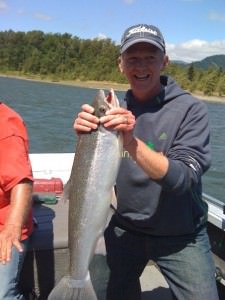 The Columbia River sees nearly constant Steelhead fishing action all year around action. From two main migrations they call either Summer Run or Winter Run.  Because Steelhead have the ability to go back and forth between freshwater and saltwater, these runs can often over-lap each other.

Believe it or not, these fish are Rainbow trout, made bigger and meaner.  Steelhead will be living most of their lives in the Pacific Ocean.

Steelhead come back up the Columbia River to spawn in the various tributaries and then head back to the ocean.

We will be Steelhead fishing on the Columbia River.

I will use a variety of lures and baits to entice these fish to bite.

These steelhead are more active and often a bit bigger than their cold winter brothers.

Summer steelhead range from five to twenty pounds, and often times even bigger than that. They like to make long drag peeling runs, acrobatic leaps from the water. which makes Steelhead such a great fight on light weight tackle.

At Marvin’s Guide Service, we fish for summer steelhead from June through September. We fish throughout the Columbia River Gorge from Portland to Hood River, so be sure to bring your camera–the scenery is amazing.