life of a Sturgeon! 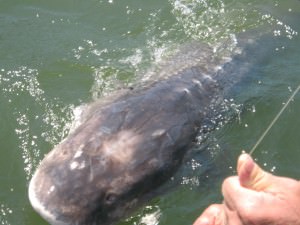 White sturgeon spawn many times in their lives. As they age, the females spawn less often, but produce more eggs in each spawning. In the late spring or early summer, they congregate in areas of rivers with a heavy current, gravel bottom, and a water temperature of 58 °F to 66 °F (14 °C to 19 °C). The fish broadcast spawn in these areas, with males releasing sperm as the outnumbered females release anywhere from 100,000 to a million eggs. The fertilized eggs then sink and adhere to the gravel at the bottom. The eggs are brown in color and will hatch in about a week, depending on water temperature. Female white sturgeon do not spawn every year.

Upon hatching, the larvae are around 0.5 in. (1.3 cm) long, with a tadpole-like appearance. They drift downstream with the current until they reach a suitable habitat. When the rearing habitat is reached, the larvae typically take around 25 days for the yolk sac to be absorbed. About a month after hatching, the sturgeon will have a full set of fins, rays, and scutes. As small juveniles, they feed on insects, small fish, and small crustaceans. Maturity is reached between 5 and 11 years, depending on the gender of the fish and the temperature of the water.

White Sturgeon can live to be over 100 years old. The rate of growth is dependent on water temperature. Typically, they reach six feet long around 25 years of age, showing that these fish do not grow as quickly as many other fish. White Sturgeon are anadromous meaning they spawn in fresh water and migrate to salt water to mature. Sturgeon may migrate in and out of salt water many times in their lives. However, since the building of many dams along the Columbia and Snake rivers, the populations above the dams have become landlocked.

Unexpected social behavior has been observed in white sturgeon of the lower Columbia River. Up to 60,000 sturgeon massed in a dense “sturgeon ball” at the base of the Bonneville Dam in early 2008. Scientists are not sure what the reason for the behavior was.
Share