Tillamook Bay witch is on the Oregon coast has five different rivers that flow in to it, the Kilchis River, Trask River, Tillamook River, Miami River, and the Wilson River. The mixing of freshwater from the rivers with the ocean’s saltwater makes the bay an estuary. With the number of rivers flowing into Tillamook Bay, large numbers of salmon run through the bay to head back to their spawning grounds,this makes for some excellent salmon fishing.

Also, because of the saltwater in estuary, Tillamook Bay holds some of Oregon’s best Crab fishing around. Can’t get much better then that, Pots full of Crab, and King Salmon on the line.

October is generally regarded to be the time to spend in Tillamook Bay for King Salmon fishing. Reports are coming in a little bit early this year with great Salmon fishing in the bay, and pots full of crab. Fishing and crabbing in Tillamook is just going to be better in October.

When you go fishing in Tillamook Bay with Marvin’s Guide Service we will drop up to four crab pots into the bay. Through the day, between fishing areas, we’ll stop in and check the traps, sort crab and re-bait as necessary. At the end of the day, Marvin’s Guide Service will cook and clean the crab for you, along with the King Salmon you may catch! Call us today and get hooked up in Tillamook Bay with some Salmon and crab fishing. 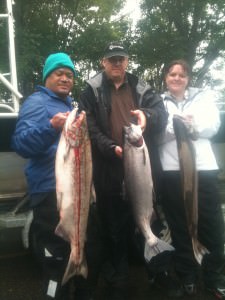 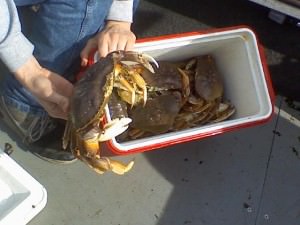