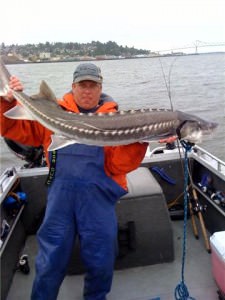 I got a phone call a few weeks ago from fox 12, asking if I wanted to go fishing again with Andy Carson and Donetta James from Oregon Beach Vacations! Of course I said yes.

The plan was to fish in Astoria Oregon on the Columbia River for Sturgeon then Andy and Donetta were going to go tours some homes in Seaside Oregon. Andy and Donetta showed up at the East Basin boat ramp in Astoria Oregon about 8:45 am, We stared to load the boat with the camera and all the gear. Mike Andy’s photographer brought this cool new water proof camera. He strapped it to the top of the boat.

Away we went! Mike is filming everything, I head down the Columbia River a few miles and set my anchor down on the bottom of the river. I put the lines it the water. man it was a wet day out but we still were fishing.

Sorry to say it was a very slow day on the river. We did knot catch a Sturgeon.

But I did catch a nice 51 inch Sturgeon the day before, so I gave that fish to Andy and the crew.

With that said it still was a blast to have Andy on my boat again. Watch for the video to air in June.

I wil have a link on my web site to the video after it airs in June so check back.

I give a special thanks to fox 12 Good Day Oregon. 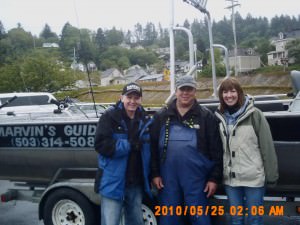