Spring Chinook Salmon fishing is scheduled to go to April 6, but could go longer if enough fish are available for harvest.

Harvest guidelines adopted by the two states will allow fishing below Bonneville Dam to catch and keep up to 14,500 hatchery spring Chinook before the run forecast is updated in May. 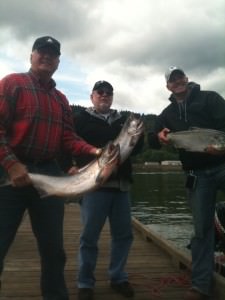 fishing is currently open to boat and bank anglers on a daily basis from Buoy 10 near the mouth of the Columbia River upstream to the Interstate 5 bridge. Under the new rules adopted, the sport fishery will expand upriver to Beacon Rock from March 1 through April 6. During that period, the sport fishery will close on three Tuesdays March 20, March 27 and April 3 to accommodate commercial gill net fisheries.

Call Marvin’s Guide Service and get hooked up in a heated a covered boat.